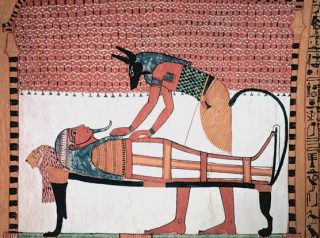 Originally only the ocean existed, but Ra, the sun, maybe born from an egg which appeared in the waters, generated four children.

Two of them, Geb and Nut, generated two song Seth and Osiris, and two daughters Isis and Nefti.

Osiris deprived Ra of the domination on the cosmos, but was killed and torno to pieces by Seth; Isis, his bride and sister, recompored the body and embalmed it, helped by god Anubi giving him back life whit powerful incantations, so Osiris became the god of the dead and Horus, Osiris’s and Isis’s son, defeated Sath during the battle and became King of the Earth.

From the myth of the creation derived the enneadi (formation of nine divinities) and the three somes (father, mother and son), that included the minor local divinities, the most important Ennead remained Ra’s numerous descent, worshipped in Eliopoli, the centre of the worship for the Sun in the Egyptian world.

Gradually, they were fused in unique and branched pantheon that, besides the divinities already mentioned, included god Amon Thot, Path, Khnum, Apis and the goddesses Hathor, Mut, Neit and Sekhat.

The minor gods, some of then were simple demons, found their place in some hierarchies of local divinities.

The Egyptian gods were represented with human bust and human or animal heads, that sometimes represented the divinities’ features, or with symbols as the solar disk or the wings of hawk, put on the pharaoh’s headgears.

Beginning from the Middle Reign (2134-1668 BC) Ra’s cult, god of the cosmic divinities, became the religion of the state, and the divinity was gradually assimilated to Amon’s figure under the teban dunasties, until he became the supreme god Amon-Ra.

During the XVIII dynasty the pharaoh Amenofi III baptized the sun god with the name Aton; his son and successor, Amenofi IV, proclaimed Aton the only true god, changing his own name in Akhenaten (Aton is satisfied), cancelling the plural word “gods” from the monuments and persecuting without respite Amon’s priest. Although he had a great influence on art and thinking of his time, Akhenaten monotheistic solar cult didn’t survive and Egypt returned, after his death, to the ancient polytheism.

The burial of the dead in Egypt was a very important ritual practise, the most elaborated one the world has ever know.

The Egyptian believed that the vital power was formed by various psychological elements, the most important of which was the Ka, a double of the body that survived after death but couldn’t exist without it; so the keep the body, the corpses were embalmed and mummified following a traditional method which was believed went back to Osiris’s mummification.

Moreover, in the tombs stone or wood copies of the body were put, as substitutes in case the mummy was destroyed, and extremely complicated tombs were built to protect the corpse and what sorrounded it.

As it was believed, after leaving the tomb, that the souls of the dead were at the mercy of many danger, the tombs all had a copy of the book of the Dead, an actual guide for the afterlife world.

After the arrival in the reign of the dead, the Ka was judged by Osiris and the 42 demons who helped him. If they decided that the dead person had been a sinner, the Ka was condemned to hunger and thirst or was torn to pieces by horrible tormentors; if instead the decision was favorable, the Ka went to the heavenly reign in the fields in Yaru, where the wheat grew very high and the existance was a celebrating version of the one on Earth.

So all the objects necessary for efterlife were put in the tomb.

As a payment for the other world and its benevolent protection, Osiris asked that the dead worked for him, for example to work in the wheat fields.

Also this task, though, could be avoided, putting some little statues called ushabiti, in the tomb so they could act as substitutes for the dead person.

The concepts of Akh,Ba and Ka